My Grandmother, Victoria, a Genocide Survivor

all the texts at this blog are copyrighted.
You may use it for educational purposes only.

Victoria, a young beautiful Armenian woman, woke up screaming and crying. Her nightmares were not surprising to her husband and five kids. They lived in a modest home in Tehran.
Victoria and Alex got married very young. They were both survivors of a vicious genocide. Their marriage was for survival purposes. She was only 14 when she got married.
The young couple were from an Armenian town in Turkey called Garin. In the spring of 1915 the Turkish soldiers started calling the Armenian men to join the army during the First World War. The Armenian men were leaving their homes believing they were going to serve in the Turkish army. Little did they know that was their march to be massacred.
My grandmother, Victoria, was only 7 years old. She was home playing with her fabric doll that her mother had made. Her 6 month old sister, Berjik, was quietly sleeping in the bedroom. Her 12 year old brother, Hambo, was playing with some pebbles.
A sudden silence fell over Garin. It seemed that the birds had stopped singing. For a few minutes there was no wind, no air, and no sounds. Then, a loud knock on the door shook the world. Hambo opened the door and two Turkish soldiers entered screaming, “Ermeni, yavour” dirty Armenian.
Victoria’s mother rushed to the door and saw the soldiers with their daggers on Hambo’s throat. She screamed and begged the men to leave the house. But the Turkish men started laughing and yelling, “You want to save your son? You have to dance for us.” Victoria was hiding under the bed. She was shaking. She was very young but wise enough to control herself not to make noise. Listening to her mother’s and brother’s cries her heart was pounding fast. Hambo got very angry seeing how these men were insulting his mother. He tried to protect her and pushed the men away, running towards his mother. The soldier got angry and slashed cut Hambo’s throat. “Oh, no, God, please save my son.” “Your son?” yelled the other soldier “I’ll give you another son.” He pushed the woman on the ground and raped her. She was devastated and shaking. Before she could realize what was happening to her, the other soldier raped her too. But that was not enough. They did not want to listen to her crying and killed her. The men, exhausted and satisfied, left the house without entering the bedroom.
Victoria came out of the bedroom and saw her loved ones’ bodies soaked in blood. She wanted to scream but she could not. Perhaps she was afraid the soldiers might return.
She grabbed her baby sister and left the house. There was commotion all over the town. Women and children were running, screaming and crying. She walked and walked and got very tired, hungry and thirsty. She could not continue carrying the baby who was also hungry. Victoria left the baby under a tree. She put some rocks around her to protect her from animals and went to look for food. After a few more hours of wandering and walking, she fell asleep out of exhaustion. The next day she could not find her way back to her baby sister. Where was she, under which tree, in which direction?
Victoria met some other women and started walking with them. They went through the deserts of Iraq. After weeks of walking they arrived to Iran.
She connected with other genocide survivors from her town. That’s where she got married at a young age. Her first son was named Hambo and her daughter was named Berjik to honor her lost sister. Berjik was my mother. My grandmother had her own family but she could not stop thinking about her baby sister. She always wondered what happened to her. Did someone rescue her? Was she eaten by animals or killed? The guilt and nightmares continued to the next generation. Her mental and emotional condition affected her kids and grandchildren.

If we cannot our control our worrisome thoughts they can destroy our inner peace. Worry can change to anxiety and become self-destructive.
We have two kinds of worries. The thoughts that come from Positive Channels are there to prevent problems. The worrying thoughts that come from our Negative Channel can be problematic.
We get energy from food and our thoughts. Half of the energy is physical, and the other half is mental and spiritual. If we let the Negative Channel control us, we lose our spiritual energy and feel tired and drained.
Many people eat healthy food and take their vitamins and minerals, and still feel drained. There can be a false sense of tiredness due to unnecessary worrying emotional and mental activity. Being aware of the negative can help to protect worrying.
Some scientists claim life events and problems are contributing factors. We are in control of 60% of our life events, 30% of our lives are affected by others, and 10% by nature. If we believe this then we can begin to feel a sense of control.
We can accept the disasters caused by nature, know that we did not cause them, and be at peace with that. Then we can focus on the 60% of the events that we can control. We havethe ability to be grateful for blessings. We are able to learn and strengthen this sense of gratitude. We can minimize our worries and maximize the positive thoughts.
By using these strategies we will be able to deal with the 30% of social and family pressures. Using positive thinking techniques will give us an inner peace and sense of happiness.

Having a sense of gratitude and appreciation of our blessings is one of our healthy feelings.
Despite having health, beauty and good families, many of us feel dissatisfied with our lives. We think that our friends or neighbors have happier lives. We are not able to appreciate all the blessings we already have. It is a habit to not feel satisfied. It’s a learned behavior that can be changed. Our emotions are connected to each other like a chain.
Here is a technique (suggestion) to use for feeling thankful for our blessings. As soon as you sense dissatisfaction or frustration, jot down the positive factors of your life in a journal or on paper. Write down both good and bad parts and compare them.
This way you will see all the amazing good things in your life that you might have been taking for granted or had forgotten. This exercise will bring them to your attention.
You will then be energized and can handle difficulties with a sense of control and enthusiasm.
You might say, “Who has time for all these activities?”, but remember by spending a few minutes to bring the positive up you can save lots of time that was wasted on negative thoughts and feelings of being drained. 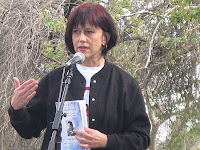 Father Vazken Movsesian of St. Peter Armenian Church in Glendale had organized an picnic in Griffith Park on Sunday, March 6, 2011. It was to stop genocide in the world. It was called Stop Genocide, Fast for Darfur.
I participated and Father Vazken invited me to the stage to present my book, Inner Heaven. I mentioned that I am a genocide survivor. I talked about my grandmother, Victoria, who suffered from depression and post traumatic syndrome because of the Armenian Genocide.
That day Dr. Dekmejian of USC invited me to be a guest speaker at his political science class.
Posted by Karine Armen at 11:22 PM No comments: 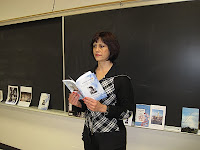 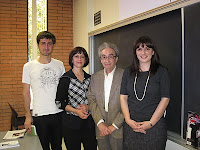 I was invited as a guest speaker to Dr. Dekmejian's class at USC on Monday, April 4, 2011. I read my grandmother's story of surviving the Armenian Genocide. This article is in the book, Inner Heaven. Later I presented the book and how I published it.
We should not have genocide in 21st century. We can stop genocide by non-violence and being active in grassroots organizations.
I met young PhD student, Marat Oganyesyan who is from Ukraine and lives in Berlin. Also, I met psychologist, Dr. Viviane Seyranian.
I am thankful to Dr. Dekmejian and Father Vazken Movsesian for giving me the opportunities to introduce my book and read my grandmother's story.
Posted by Karine Armen at 11:14 PM No comments: 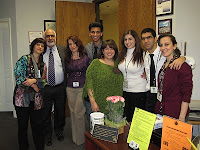 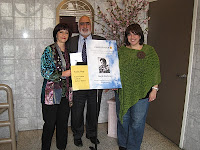 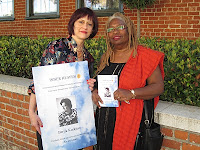 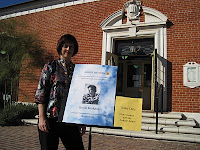 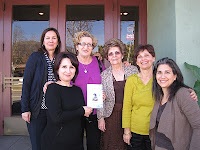 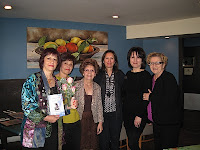 The blessing of my mother's self-help book Inner Heaven.
The first event was on Saturday, February 12, 2011 at Pasadena Public Library.
I am grateful to Don Fisher-Campbell for organizing the event.

The second event was at Ark Family Center in Glendale on Saturday, March 26 which was also my mother's birthday.
I am thankful to Dr. Khudaverdian and Melina Sardar and the volunteers of the Ark Family Center.

My friends took me to breakfast to celebrate the publication of my book.
Posted by Karine Armen at 10:55 PM No comments: