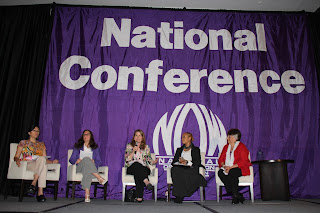 Twice I have participated in women's conferences and both times I realized that I was the only Armenian there. More than 400 women participated in the conference organized by National Organization for Women, July 27 -29, 2014. Seven years earlier I went to Valencia, Spain to be part of Women In Black peace conference.

The participants which included delegates, board members, and some men who had gathered to discuss national issues related to women.   NOW is a grassroots organization that was founded in 1966.  Its main goal was to provide equal rights for women.  Today the Equal Rights Amendment has yet to be passed.  Men get higher salaries for performing the same duties at many jobs.  NOW is a multi-issue, multi-strategy organization that takes a holistic approach to women's rights.

There were women from diverse ethnic backgrounds:  African-American, Native American, Latinas, and from  places like the Dominican Republic and India.  All had the same concerns about women's rights.  As I was listening to the speakers I thought about my Armenian sisters (women) in Armenia, U.S. and the diaspora.  When they talked about domestic violence it reminded me of Zaruhi Petrosyan who died in 2010 due to severe injuries inflicted by her husband and mother-in-law.   Zaruhi's case shed light on the domestic violence in Armenia and, as a result, the Coalition to Stop Violence Against Women was formed there. "Women's rights are human rights" is what I  heard during many of the workshops I attended.  In the 1980s I was working at an information and referral hotline where I talked to callers, assessed their needs, and referred them to organizations that could assist them.  Several times I had Armenian callers in need of a place to stay because they had to leave their abusive husbands.  Also, I had an Armenian man calling to request court ordered anger management classes.  Of course, it took me a while to understand what he really needed - he was embarrassed to say he hit his wife.  He said he needed to attend some classes.  As I probed more to see what kind of classes, I realized what had happened.  I tried to bring attention to  domestic violence in the Armenian community, but I was faced with denial.  The media did not want to touch it.

Later, when I moved from social work to teaching, I still saw domestic violence.  One of my student's father shot his wife and himself and left the three kids orphaned.  Another mother ran to our school and asked for refuge.  I called the Emergency Shelter Hotline and arranged a shelter for her and her three kids.  Of course, after few days she returned to her abusive husband.  Only after postings in  social media, our community is talking about this issue.  Zaruhi's case was a wake up call for all. After that incident Datev Community Outreach was founded in Glendale to bring awareness to the Armenian community.  Also, Armenian International Women's Association has many services for women in Armenia focused on domestic violence.  But we have a long way to go.

Armenian women living in U.S. we are subject to the same issues and concerns as the local women.  We have to deal with discrimination, domestic violence, equal rights and pay.  How many Armenian women  are involved in the local politics?  How do we raise consciousness about our issues?

In the summer of 2007 I attended the Women In Black peace conference in Spain. Again, I was the only Armenian participating.  Women In Black is a grass roots peace group started by Israeli women in Jerusalem in 1988. It was a reaction to the violations of human rights by Israeli soldiers in the Occupied Territories. The women decided to hold a vigil every Friday in central Jerusalem, wearing black clothing in mourning for all victims of either side and holding signs with the slogan "Down with the Occupation". Later, many Jewish women who felt critical of the policies of the Government of Israel formed their own, local Women In Black groups. Such groups took up a variety of local social and political issues, and the idea spread fast. It has now become an international movement. Women In Black has many active members in Belgrade. In the 1990s they were confronted by violence from nationalists and persecution by police.  They were called "witches" among other negative names. The worldwide Women in Black keep in regular contact via e-mail and the Internet and hold international conferences every two years. The movement has been growing in the United States since the war in Iraq, which is an important issue for many members of the movement. Some chapters of the movement also encourage men to participate, though the movement still consists mostly of women. Standing together in complete silence is a main activity of the group.

Armenian women need to get involved in grassroots organizations.  Our daughters can benefit from our fights and activism.  We have so many educated Armenian women who are active at some organizations, but it is essential to see them in variety of American and international groups.  We need community awareness for all but only with women's participation we can get equal rights and better working conditions, after all women's rights are human rights. 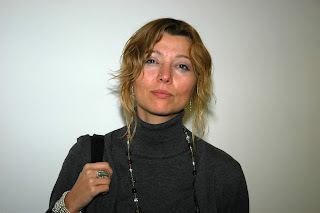 Exhibiting at Silvana Gallery artist Seta Injeyan’s series ‘Indivisible Vibrations of Heart and Light’ echoes the heart-beat of memory and inner light as the coalescing borderless energy in us all. Translucent amber reds, juxtaposed Perspective Surreal images mirrors among past, present and future, poetry-inspired brush color paintings and youthful see-through abstract greens are for Seta Injeyan a way of exploring the unifying cosmic energy we know as life.

History for Injeyan is crucial to her work. It enables her to share historical references and their implications for the present, and upcoming future. Her readings of turn-of-the-20th-Century Armenian poet Daniel Varoujan’s work play into the theme of many of her paintings. “When reading him,” says Injeyan, “I am inspired to be daring with reds. I could not use colors this way had it not been for Varoujan’s poetry.” Her work bridges art, literature and society with that of Daniel Varoujan’s poetry of the psyche.

In several of her exhibiting works a painted side mirror becomes a mediator between a new horizon ahead and memory. The mirror takes on a metaphorical expression becoming the looking glass representing past as a lived experience and the search to construct new paths that can bring hope. Injeyan’s paintings titled Heart and Soul, Life Force and Heart as Vessel all explore the energy of the heart and its relation to all aspects of human expression.

In her painting titled ‘Song of My Heart’ Injeyan is inspired by two of Varoujan’s anthology  of poems, Song of The Nation and Song of the Bread. It is a painting with Varoujan’s image, an indivisible pulsing-red aura shaped as a heart and a galaxy-shaped basket cosmically radiating extraordinary brush strokes of yellow, red and blue hues.
It is Injeyan’s way of paying homage to one of Armenia’s most important poets of the 20th Century, Daniel Varoujan killed at the age of 31 at the start of the 1915 Armenian Genocide  by the Ottoman Turkish Empire.

Seta Injeyan roots herself to her history, to her culture and humanity. Her work is particular and universal at the same time. Her work is a self reflecting call for harmony, sensibility and peace.
About the artist:  Seta Injeyan is a Los Angeles-based artist.  She has B.F.A. from Art Center College of Design.  She has had many solo exhibitions and won many best-of-show awards.  She has introduced the  genre of Perspective Surrealism into modern art.
www.setainjeyan.com 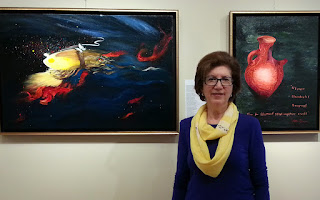 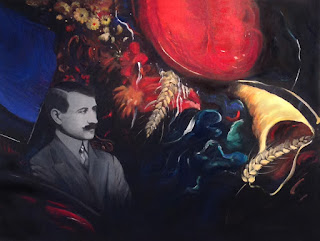 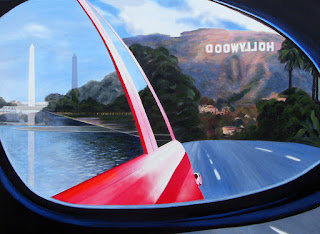 Posted by Karine Armen at 10:47 PM No comments: